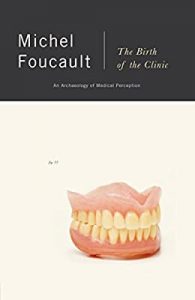 Our February, 2020 meeting of LMCC took place on Tues. Feb. 11 from 5:00pm-6:30pm. We focused on Michael Foucault’s 1973 text The Birth of the Clinic: An Archaeology of Medical Perception, especially the Preface and Chapter 1, “Spaces and Classes.”

Michel Foucault, Michel. The Birth of the Clinic: An Archaeology of Medical Perception, 1973.

“Clinical experience—that opening up of the concrete individual, for the first time in Western history, to the language of rationality, that major event in the relationship of man to himself and of language to things—was soon taken as a simple, unconceptualized confrontation of a gaze and a face, or a glance and a silent body; a sort of contact prior to all discourse, free of the burdens of language, by which two living individuals are ‘trapped’ in a common, but non-reciprocal situation” (xiv-xv).

“I should like to attempt here the analysis of a type of discourse—that of medical experience—at a period when, before the great discoveries of the nineteenth century, it had changed its materials more than its systematic form” (xviii).

Foucault calls his project “deliberately both historical and critical, in that it is concerned—outside all prescriptive intent—with determining the conditions of possibility of medical experience in modern times” (xix). He also deems it “a structural study that sets out to disentangle the conditions of its history from the density of discourse, as do others of my works” (xix).

“In the rational space of disease, doctors and patients do not occupy a place as of right; they are tolerated as disturbances that can hardly be avoided: the paradoxical role of medicine consists, above all, in neutralizing them, in maintaining the maximum difference between them, so that, in the void that appears between them, the ideal configuration of the disease becomes a concrete, free form, totalized at last in a motionless, simultaneous picture, lacking both density and secrecy, where recognition opens of itself onto the order of essences” (9).

“The hospital, which creates disease by means of the enclosed, pestilential domain that it constitutes, creates further disease in the social space in which it is placed. This separation, intended to protect, communicated disease and multiplies it to infinity” (18-19).

“Is a medical experience, diluted in the free space of a society reduced to the single, nodal, and necessary figure of the family, not bound up with the very structure of society? Does it not involve, because of the special attention that it pays to the individual, a generalized vigilance that by extension applies to the group as a whole?” (19).