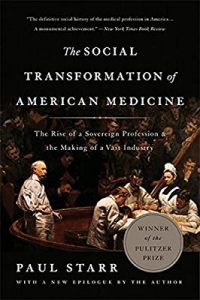 Our March, 2020 meeting of LMCC took place on Tues. March 3 from 5:00pm-6:30pm. We focused on Paul Starr’s The Social Transformation of American Medicine: The Rise of a Sovereign Profession & the Making of a Vast Industry, first published in 1982 and updated in 2017. We focused especially on:

Starr, Paul. The Social Transformation of American Medicine: The Rise of a Sovereign Profession & the Making of a Vast Industry, first published in 1982, updated edition in 2017.

“…my primary intention in writing this volume has been to provide an integrated account of the social and economic development of medicine in America. I have tried to present an interpretation that makes sense in terms of the broader historical patterns in our culture, economy, and politics” (xvi).

“My hope is that this historical analysis may help to illuminate our present predicament, even for people of divergent sympathies. I have sought to trace not only the origins of the institutions and policies that are with us today but also the fate of those that failed or were defeated or stunted in their development” (xvii).

Starr gives a general idea of the evolution of medicine into an autonomous industry with professional sovereignty. His methods are “simultaneously structural and historical” (7). He “goes back and forth between consciousness and organization in attempting to understand both the grown of the cultural authority of the medical profession and the conversion of that authority into the control of the markets, organizations, and governmental policy” (8-9). He defines the way he will use such terms as “power,” “authority,” “structural authority,” and “cultural authority.” He also takes the time to debunk counterclaims or alternatives to his interpretation.

“Our conceptions of disease and responses to it unquestionably show the imprint of our particular culture, especially its individualist and activist therapeutic mentality” (3).

“The history of medicine has been written as an epic of progress, but it is also a tale of social and economic conflict over the emergence of new hierarchies of power and authority, new markets, and new conditions of belief and experience” (4).

“How the medical profession rose to this position of cultural authority, economic power, and political influence; how, together with other powerful social forces, it shaped the institutional structure of medical care; and how that system has now evolved, so as to put the profession’s autonomy and dominance in jeopardy—these are the questions that this book addresses” (5-6).

“Authority, in its classical sense, signifies the possession of some status, quality, or claim that compels trust or obedience. As part of this ability to compel trust or obedience, authority signifies a potential to use force or persuasion, though paradoxically authority ends when either of these is openly employed…. Authority, therefore, incorporates two sources of effective control: legitimacy and dependence. The former rests on the subordinates’ acceptance of the claim that they should obey; the latter on their estimate of the foul consequences that will befall them if they do not” (9-10).

“The transition from the household to the market as the dominant institution in the care of the sick—that is, the conversion of health care into a commodity—has been one of the underlying movements in the transformation of medicine. It has simultaneously involved increased specialization of labor, greater emotional distance between the sick and those responsible for their care, and a shift from women to men as the dominant figures in the management of health and illness” (22).

“Before the late nineteenth century, the conditions of agrarian life did not permit dependence on medical authority, and popular skepticism about professional claims did not encourage it. There were three spheres of practice relatively equal in importance—the medicine of the domestic household, the medicine of the physicians, and the medicine of lay healers” (32).

“In the classical view, illness had no local origin in the body; it was a general disturbance caused by an imbalance of the four humors (blood, phlegm, yellow and black bile). After the Newtonian revolution in physics, new medical theories attributed disease to disturbances of solid entities in the body, such as the blood vessels, but the basic model remained the same. Disease was the result of a single, underlying condition that affected the entire constitution; however, in any given patient, the factors that brought on this condition were individual. The entire focus of treatment was on the patient’s symptoms, which were regarded, not as signs of the disease, but as the disease itself. This orientation to symptoms, suggests Jewson, reflected a consultative relationship, in which the patient was the more powerful figure” (38-39).

“The [medical] societies faced a fundamental problem. If they insisted on high standards, their membership would be small, and they would be unable either to isolate quacks or control price cutting by competitors. If, on the other hand, they admitted the larger number of practitioners to help isolate quacks and impose fees, they would be unable to insist on high standards for professional status. Neither alternative could greatly elevate the profession’s social and economic condition; there were no means to induce compliance and participation. So membership was low, dues were often unpaid, rules were ignored, and some early societies lapsed completely into inactivity for long periods” (46).

“This new orientation was not simply a rearrangement o the elements within the traditional structure of medical thought; it transformed the structure itself. The nature of debate also changed. Empirical evidence rather than dogmatic assertions of personal or traditional authority became the grounds for assessing truth” (55).

In reaction to a confidence in common sense and a distrust of any perceived mysticism, which included licensures: “The development of science broke that confidence. It helped establish the cultural authority of medicine by restoring a sense of its legitimate complexity…. Science shares with the democratic temper an antagonism to all that is obscure, vague, occult, and inaccessible, but it also gives rise to complexity and specialization, which then remove knowledge from the reach of lay understanding” (59).

Over time, people became convinced of the “growing complexity of medical science and the limits of lay competence. Every man, it became clear, could not be his own physician. The democratic interregnum of the nineteenth century was a period of transition, when the traditional forms of mystification had broken down and the modern fortress of objectivity had not yet been built” (59).