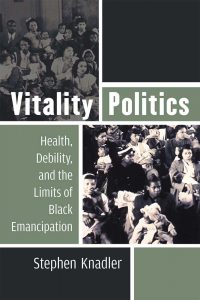 Our September, 2020 meeting of LMCC took place on Wed. Sept. 30 at 5:30pm via Zoom. We focused on Stephen Knadler’s Vitality Politics: Health, Debility, and the Limits of Black Emancipation, especially the introduction, “Ill-Defined Emancipations.”

“I want to ask in the chapters that follow, how do we tell, and how did early Black cultural production tell, the stories of those Black Americans who suffered, sickened, and died ‘ill-defined’ outside a post-Reconstruction United States’ care and counting?” (2).

“How, in other words, did white supremacism turn to sociopolitically structured vulnerabilities and the supposed neutral laws of health to implement, or allow, a racial violence that went unrecognized and ‘undefined,’ or, to borrow the phrasing of contemporary medical science, ‘ill-defined,’ because it could be said to have no stated causes outside the supposed implacable laws of providence, physiology, or economics” (2).

“The term ‘vitality politics’ in the chapters to follow, thus, identifies a post-Reconstruction politicization of biological health as an instrument for insisting on a racial state of exception in which African Americans’ own unhealthy habits and disease susceptibility justified their legitimate suspension from full rights to social justice, economic opportunity, political equality, and freedom” (6).

“Drawing on theories of antiblackness, however, Vitality Politics argues that racism, or more accurately white supremacism in the United States, was not anaberration from the nation’s liberal social contract, but inherent and essential to its original formulations of individual rights, economic self-determination, and full political and legal citizenship” (7).

“Vitality Politics contends that there is more to the story of Black debility than the question of ‘disparities’ (a descriptive term) in health status, access to care, and quality of treatment, which are often viewed merely as additional sites of Jim Crow racism…. antiblackness encompasses more than racial bias, discrimination, white privilege, and even violence. Antiblackness refers to a foundational structuring differentiation and devaluation of Black lives embodied in slavery, but that continues in its afterlife” (7).

Racial capitalism: “it also literally debilitated African Americans to make them allegedly unfit to compete in a modern meritocratic industrial and entrepreneurial order or to be capable of complete citizenship rights. A socio-politically conditioned Black debility was central in defining, shaping, and marking the limits of the liberal state’s claims about race transcendent merit and individual opportunity for all” (9).

“Fundamental to the rise of the modern industrial U.S. liberal racial capitalist state was an evaluation of all persons in terms of their health, efficiency, and thus potential for productivity and upward mobility, but at the same time maintaining U.S. myths of a responsible, productive, and efficient white labor also meant a corresponding devaluation of other Black workers as lacking, as debilitated, or disabled” (15).

“To speak only of the deterministic power of structural constraints, many early twentieth-century African American women community activists implied, fails to recognize the entanglement of bodies and minds ‘with’ or as part of ‘human and non-human assemblages,’ a co-constitution of human and things, in which housing (hygienic or not), microbes (contagious or not), food (fortifying or not), odors (pernicious or not), yards (beautiful or not), and other materialities all challenge the meaning of freedom, agency, and personal accountability enshrined within traditional liberal theory. In her insistence on a vitality politics ‘with’ and not ‘to’ urban migrants, Barrier Williams recognized that achieving a more complete emancipation is finally about the struggle of Black people to manage their life worlds and the everyday encounters of their body with, in, and through urban spaces that had often been designed to discipline, debilitate, and kill them” (28).

“[I]t is not enough simply to bring African Americans into the room and offer them a place at the table. As Barrier Williams implies, one must be mindful of how the everyday, quotidian things of the room—from the table itself, to the lighting, the odors, the germs, the noise, the food and water—have all been working to make and unmake Black well-being” (29).

“[R]acial progress must account for the mundane violence that happens alongside the legal, economic, and political realms, though it is inseparable from and created through them. Racial progress must address the complex way in which post-Reconstruction African Americans were denied access to vitality, living in persistent and seemingly implacable spaces of precariousness, which fostered disease, disability, and a concomitant dread that foreclosed a vigorous Black future” (33).

“In summation, then, the following chapters seek to trace out the responses of early twentieth-century Black cultural production to the unequal distribution of life and death, hope and harm, endurance and exhaustion” (48-49).

“These works offer an immanent critique—rather than necessarily a moral or a political one—since what we discover in regathering an improper archive of early twentieth-century Black cultural production is the unruly, messy, and often failed ways these writers tried to make sense of what it meant to live as a racialized subject in the face of new forms of slow contagious violence and a corresponding emancipatory but also disciplinary vitality politics” (49).