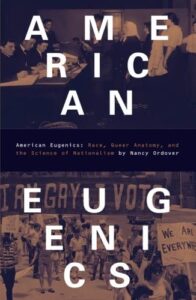 ‘s 2003 monograph American Eugenics: Race, Queer Anatomy, and the Science of Nationalism, especially the introduction and an additional chapter of each person’s choice.

Our next meeting will take place on Wed. Oct. 27 at 5:30pm est. We will meet virtually using the same Zoom link. We will post an announcement about that meeting soon.

“The Bell Curve [published in 1994] merely restated old claims, chief among them being that intelligence can be quantified (by IQ tests), that African-Americans score an average of fifteen points lower than white Americans on these tests, and that genes are accountable for this rift” (Ordover xi).

“Early eugenics proponents, drawn from the ranks of scientists, politicians, doctors, sexologists, policy makers, reactionaries, and reformers, held that through selective breeding humans could and should direct their own evolution…. The legislation they drafted, the interventions they backed, the medical regimens they prescribed stemmed from a belief that everything from intellect to sexuality to poverty to crime was attributable to heredity” (Ordover xii).

“‘Eugenics’ was avoided, but phrases such as ‘cognitive elite’ and ‘cognitive disadvantage’ began to gain currency in some circles, along with the resurrected ‘dysgenesis’ (referring to the deterioration of allegedly heritable qualities from one generation to the next—in this instance the outbreeding of high IQ testers by those with lower scores)” (Ordover xii).

“The long-lasting appeal of eugenics has rested on its protection of the status quo, on its emphasis on individual and group ‘failings’ over analyses of systemic culprits, and on its bedrock insistence on scientific/technological remedies over fundamental social and institutional change” (Ordover xiii).

“To grasp the resiliency of this often discredited but never dormant philosophy is to understand the consolidation of race, gender, class, sexuality, and nation—not only as categories but also as ideological weapons of a state committed to eugenic curatives” (Ordover xiv).

“An examination of immigration ‘reform,’ past and present, provides an opportunity to expose the intertwining strands of eugenicist thought, if for no other reason than the fact that individual eugenicists have seldom confined their attacks to a single demographic group or social policy” (Ordover xviii).

“While current anti-immigration offensives can in no way be reduced solely or even primarily to manifestations of scientific racism or paranoid concerns over the national gene pool, it would be a mistake to minimize the resemblance between much of the current rhetoric and the previous eugenics crusades for restrictive immigration laws it recalls” (Ordover xix).

“It would be impossible to excavate the roots and the reach of the medicalization of queers without an understanding of scientific racism and other eugenics endeavors. Not only were they ideologically tethered, but they had the same champions and often the same victims” (Ordover xxi).

“African-American lesbians and gays were declared predatory; their anatomy, gender deviation, and sexual propensities sensationalized and exaggerated by researchers seeking to substantiate their own biases. Eugenics enterprises emerge as inextricably linked. Treatises on homosexuality enlarged and benefited from existing pronouncements of scientific racism, as well as eugenicist justification of the economic status quo and the relentless monitoring of female sexuality and compliance with gender norms” (Ordover xxii).

“While there can be no doubt that U.S. eugenics has been staked and sustained by all manner of reactionaries and conservatives, congressional xenophobes, racist policy makers, paternalistic medical practitioners, and a judiciary hostile to the poor and to the disabled, it has also been promoted by many who would recoil at being included in these ranks” (Ordover xxiv-xxv).

“Sterilization in the South was referred to as the ‘Mississippi appendectomy,’ not only because it was so common but because medical staff relied on deception to obtain ‘consent.’ Similar ‘protocol’ was followed in clinics across the United States as hysterectomies and tubal ligations were performed on Chicanas, Puerto Ricans, African-Americans, and Native Americans without patient (or, in the case of young girls, parental) consent” (Ordover xxvi).

“The history of eugenic sterilization is also the history of the steadfast refusal of liberal organizations, including some liberal feminist organizations, to oppose practices that constitute population control policies and state-sponsored assaults on poor women and girls of color, even as they espouse reproductive ‘choice.’ But ‘choice’ is not a static or immovable construct. It does not stand outside of history or politics or society. It is bound by race and class, particularly where technology is concerned” (Ordover xxvii).

“Eugenics has always been an extremely nimble ideology. It cannot be isolated from the movements it bolstered and was conscripted by: nationalism, ‘reform-oriented’ liberalism, out-and-out homophobia, white supremacy, misogyny, and racism. Its longevity relies on these confederacies for the simple reason that even as one falls into relative disrepute, others remain intact” (Ordover xxvii).

“These earlier campaigns were also constituted by, and constitutive of, racism, xenophobia, and nationalism. This dynamic interplay, together with the opportunism of the eugenics movement, asserts itself repeatedly in U.S. immigration history…. Eugenics was, after all, a response to both internal and external ‘perils.’ The Great Migration, the growing immigrant population, hysterical fears about ‘miscegenation’—all propelled eugenics among reactionaries and reformers alike…. Likewise, class cannot be separated out of the equation, affected as it is by racism and given the fact that ‘immigrant’ was a buzzword for a specific stratum of workers in so many legislative bills governing entry and naturalization. Most importantly, class divisions were, and continue to be, validated by eugenic explanations. The poor have borne the brunt of eugenic enactments” (Ordover 4).

“It is a history complicated by the pliant usage of ‘race’ during the late nineteenth and early twentieth centuries to refer, at any given time, to religion, color, class, and/or national origins. Eugenicists’ contributions to this legislation included the designation of moral, physical, and mental ‘inadequacies’ as the immutable property of racialized immigrants and U.S.-born outsiders” (Ordover 4).

“For the better part of this century, eugenics, like the immigration bans it supported, has played a pivotal role in the ‘exclusive racism’ Étienne Balibar has identified as essential to ‘purifying’ the nation. But the physical and ideological construction of the nation is a project that can never be completed, requiring constant monitoring and patrolling of literal and figurative borders. Eugenics has always been primarily concerned with what the nation would look like” (Ordover 6).

“In constructing entire racialized categories of demonized others, eugenicists put forth an ideologically purified America—purged of past sins and guarded against future menace. The eugenics project revolved around imagining the nation: what it was (now threatened) and what it might be (with and without government and medical intervention). It was the sort of creative visualization that demanded both historical revisionism and ominous prophesy” (Ordover 7).

“The litany of moral, intellectual, and physical deficiencies of racialized outsiders was no longer mere conjecture, but backed by the creative number crunching of exclusionists and others. Immigrants and their progeny joined the native poor, the physically and developmentally disabled, the sexual outcasts, African-Americans, prostitutes, alcoholics, addicts, convicts, and others as subjects of eugenic and statistical scrutiny. This was inevitable, not only because of a stalwart faith in science and progress, but because eugenicists were motivated by a desire to substantiate and sustain existing social hierarchies and not by legitimate research imperatives. Biologism, in short, served not only to preserve the status quo, but also to evade analyses of socioeconomically generated inequities” (Ordover 9).

“In 1912 immigrants disembarking at Ellis Island became the first group in the country to whom the IQ tests were administered. Like so many other eugenic undertakings, Goddard’s had a built-in class bias: only those who came steerage were subject to examination” (Ordover 11).

The 1917 act, H.R. 10384: “It emerged in the heyday of American eugenics, and should be viewed as part of the political and cultural backlash that accompanied not only the influx of eastern and southern European immigrants (and what remained of Asian immigration after decades of restrictive enactments) but also the large-scale movement of African-Americans to the Northern cities during the Great Migration. It reinscribed the ethnic/racial scapegoating cultivated by eugenic treatises on criminals and the mentally ill, and dovetailed nicely with half-hearted gestures to labor and to popular antianarchist sentiment” (Ordover 14).

“Issues of crime, health, insanity, and morality all fell to eugenic inspection, and human failings were meted out with scientific precision to the ethnic, often immigrant, target of the day” (Ordover 14).

“More than once, eugenics has posed as pan-class solidarity. In the ongoing rhetoric surrounding immigration restriction, the livelihood of American-born workers was (and is) often invoked” (Ordover 14).

“The jobs of eugenically fit American workers had to be protected from unfit foreigners so that the former would have the financial wherewithal to raise children. This paternal attitude toward poor workers represented yet another inconsistency on the part of eugenicists who elsewhere categorized poverty as a manifestation of innate ‘dysgenesis’ (thereby scientifically rationalizing the inequitable distribution of wealth under capitalism)” (Ordover 15).

“The 1917 act was an opportunity for Congress to affirm its own parameters of whiteness, as Mills describes, to enshrine white personhood simultaneously with nonwhite personhood, and to further reify race as an immigration consideration” (Ordover 19).

“Anti-anarchist and pro-eugenics appeals were often wedded, perhaps because eugenicists identified radicals and carriers of ‘deficient germ plasm’ with the same demographic groups. More likely, it was due to eugenicists’ position vis-à-vis various political ideologies as both consumer and consumed. In this instance, they were able to exploit an antileftist nationalism and to trade on xenophobia by pronouncing immigrant radicals eugenically dangerous. Bolstered by reactionary sentiments, eugenicists professed to be guarding the nation’s biological and political future, while simultaneously validating the aims and efforts of restrictionists and reactionaries outside their immediate circle” (Ordover 22).

“Eugenicists were nothing if not dexterous, and therefore partook not only of xenophobia and red-baiting, but again appealed to native labor’s concerns. The finger was pointed at greedy industrialists…. Thus, though promoting elitist concepts of the ‘higher’ and ‘lower’ born, proponents simultaneously invoked a sort of eugenic populism, wherein big business was posited as a menace to both the native workforce and the national gene pool” (Ordover 23).

“Certainly, the 1924 legislation should be considered the consummate payoff for eugenicists and others who felt previous bills did not go far enough. It was much closer to the legislation they had lobbied for even prior to the 1917 act, and thus eugenicist input into the National Origins Act should be viewed as spanning a much longer period than the mere seven years that separated the two laws” (Ordover 24).

“Here was a recurring tactic in the eugenicists’ arsenal: using one despised group to denigrate another. The violent myth of Black intellectual inferiority, so long enshrined as fact in the white imagination, was a handy yardstick with which to measure all comers. Eugenicists were extremely agile in the strategic use of metaphor. Analogy has surfaced again and again in analysis and treatment of women, queers, and the disabled” (Ordover 26).