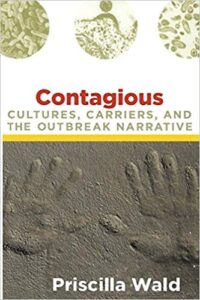 Our next meeting will take place on Wed. March 31 at 5:30pm est using our usual Zoom link. We will post an announcement about that meeting soon.

Discussing SARS in 2003: “Accounts of prior disease outbreaks helped epidemiologists identify and respond to the problem. Such accounts also supplied points of reference for journalists seeking to inform the lay public about the spreading infection. Even medical researchers relied on their knowledge of similar microbes as they worked to understand the unfamiliar one. As these precedents allowed experts to make sense of a new situation, they also shaped what they saw and how they responded” (1).

“[T]he circulation of microbes materializes the transmission of ideas. The interactions that make us sick also constitute us as a community. Disease emergence dramatizes the dilemma that inspires the most basic human narratives: the necessity and danger of human contact” (2).

The outbreak narrative: “The outbreak narrative—in its scientific, journalistic, and fictional incarnations—follows a formulaic plot that begins with the identification of an emerging infection, includes discussion of the global networks throughout which it travels, and chronicles the epidemiological work that ends with its containment” (2).

Goal of the book: “Outbreak narratives and the outbreak narrative have consequences. As they disseminate information, they affect survival rates in contagion routes. They promote or mitigate the stigmatizing of individuals, groups, populations, locales (regional and global), behaviors, and lifestyles, and they change economies. They also influence how both scientists and the lay public understand the nature and consequences of infection, how they imagine the threat, and why they react so fearfully to some disease outbreaks and not others at least as dangerous and pressing. It is therefore important to understand the appeal and persistence of the outbreak narrative and to consider how it shapes accounts of disease emergence across genres and media. That is the project of this book. I am motivated in this work by my conviction that an analysis of how the conventions of the outbreak narrative shape attitudes toward disease emergence and social transformation can lead to more effective, just, and compassionate responses both to a changing world and to the problem of global health and human welfare” (3).

“The masks depicted what SARS threw into relief: human beings’ futile efforts to defend themselves against the threat of illness in the daily interactions made global by contemporary transportation and commerce. Human networks became the conduits of viral destruction” (4).

“The Newsweek account accounts fostered ‘medicalized nativism,’ a term coined by the historian Alan Kraut to describe how the stigmatizing of immigrant groups is justified by their association with communicable disease; it implies the almost superstitious belief that national borders can afford protection against communicable disease” (8).

“…the disease is associated with dangerous practices and behaviors that allegedly mark intrinsic cultural difference, and it expresses the destructive transformative power of the group” (8).

“The temporal frame implicit in the description of certain practices as ‘primitive’ obscures the understanding of those practices as expressions of poverty. While the social and spatial transformations of global modernity exacerbate this poverty, the intrinsic temporality provided by the use of ‘primitive’ enables contradictory representations of global modernity in media accounts of SARS: global networks as both threat and solution” (8).

“The physiological metamorphosis of human carriers turns them into representational figures of the fact, the danger, and the possibilities of human interdependence in a shrinking world” (9).

“As they simultaneously forecast the imminent destruction and affirm the enduring foundations of community, they offer myths for the contemporary moment, which explains the imaginative hold and the persistence of the story that I am calling ‘the outbreak narrative.’ The consequences in all of these realms when medicine meets myth is the subject of this book” (10-11).

“[The] word contagion literally means ‘to touch together’, and one of its earliest uses in the fourteenth century referred to the circulation of ideas and attitudes. It frequently connoted danger or corruption. Revolutionary ideas were contagious, as were heretical beliefs and practices. […] The medical use of the term was no less metaphorical than its ideational counterpart” (12).

“Human carriers teach the shared lesson of psychoanalysis and bacteriology: that human beings lack self-knowledge. Like Oedipus, we do not know who—or what—we are. It is what makes us dangerous, and it mandates new codes of conduct…. The earliest identified human carriers analogously dramatized the need for new ways of being in a world of newly identified microbes and increasing human contact…. Human carriers readily became scapegoats: examples of the transgressions of the group for which they symbolically suffered” (17).

“As narratives such as The Decameron demonstrate, the social experience of disease, the image of communicability, and the materialization of interdependence that characterize depictions of epidemics suggest an epidemiology of belonging through which people might experience their emergence as ‘a population.’ The idea of contagion was demonstrably formative for the experience of ‘community’ in the early years of bacteriology, when Freud and Durkheim were writing” (18).

“Epidemiologists build on precedents from previous outbreaks that they hope will make future outbreaks comprehensible, and ultimately preventable, or at least containable. When epidemiology turns an outbreak of communicable disease into a narrative, it makes the routes of transmission visible and helps epidemiologists anticipate and manage the course of the outbreak. In that transformational capacity, the epidemiological narrative is, like the microscope, a technology, and it is among the epistemological technologies that delineate the membership and scale of a population” (19).

“These formulations projected a narrative logic onto epidemics, and the role of epidemiology was at once to read and to write the epidemic as a story of detection with predictive value. Narrative was thus central to epidemiology, which marked the conjunction of art and science, where it epitomized the most profound faith in human achievement” (23).

“Tracing the evolution of these characters and the narratives that feature them is central to my aim in this project, which is to understand the appeal and consequences of stories about disease outbreaks and disease emergence generally. The outbreak narrative is conventional and formulaic, but it is also always evolving. Stories of disease emergence in all their incarnations are so powerful because they are as dynamic as the populations and communities that they affect” (28).