Our August 2022 meeting for LMCC actually took place on Thursday, September 1 at 5:30pm in the HHIVE Lab and via Zoom. 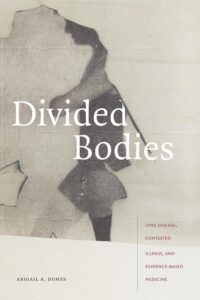 We discussed Abigail A. Dumes’s 2020 monograph from Duke University Press, Divided Bodies: Lyme Disease, Contested Illness, and Evidence-Based Medicine. Specifically, we focused on the introduction, “Lyme Disease Outside In” (pp. 1-25).

Although we usually try to record our meetings, due to some technical issues, we were unable to record this particular meeting. However, for recordings of our other past virtual meetings, click here.

Our next meeting will take place on Wednesday, September 28 at 5:30pm in the HHIVE Lab, also called Gaskin Library, Greenlaw Hall Room 524. If you can’t attend in person, you can attend in real-time via our usual Zoom link. We will send out an announcement soon with more information for that meeting.

A few reminders and announcements:

“Lyme disease is one of the most controversial medical issues in the United States, and, like other illnesses whose biological reality is contested, including chronic fatigue syndrome, Gulf War syndrome, and multiple chemical sensitivity, it is replete with class action lawsuits, patient protests, polarizing documentaries, congressional hearings, and state and federal investigations. The crux of Lyme’s controversy is whether the disease can persist beyond standard antibiotic treatment” (Dumes 1-2).

“This book sits at the heart of the disagreement over how to diagnose and treat Lyme disease, and it explores why, in an era of evidence-based medicine, the systematic production and standardization of evidence has amplified rather than diminished disagreement related to contested illnesses” (Dumes 2).

“Institutionalized in the United States in the late 1980s and early 1990s, evidence-based medicine is an approach to standardizing clinical care that promotes the use of clinical guidelines and the hierarchization of scientific evidence, at the top of which is the ‘objective’ evidence of randomized controlled trials and at the bottom of which is the ‘subjective’ evidence of expert opinion” (Dumes 2).

“…the emergence of evidence-based medicine has contributed to the perceived delegitimation of contested illnesses through the formal categorization of ‘medically unexplainable illness’” (Dumes 3).

“Through formal categorization, patients with contested illnesses (chronic Lyme patients foremost among them) have become bound together in a more cohesive and more visible ‘biosociality’ of ‘delegitimized’ suffering that has allowed them to mobilize against their medical marginalization” (Dumes 3).

“In its exploration of Lyme’s fractured reality, this book not only offers the first ethnographic analysis of the Lyme disease controversy but also brings into focus the social complexities of contested illness within the increasingly standardized bounds of US biomedicine” (Dumes 4).

“Mainstream proponents argue that the bacterium that causes Lyme disease, Borrelia burgdorferi, does not persist in the body at pathogenic levels after standard antibiotic therapy. As a result, these physicians perceive chronic Lyme disease (the attribution of symptoms that persist beyond antibiotic treatment to persistent Borrelia infection) to be one of a range of medically unexplained illnesses. That is, they classify chronic Lyme as an ‘illness’ (a subjective experience of physical distress) rather than a ‘disease’ (a condition substantiated by biophysical markers that warrants biophysical intervention)” (Dumes 5).

“Despite critical differences in how the mainstream and Lyme-literate communities interpret Lyme disease, both seek to establish credibility through the scientific authority of evidence-based medicine” (Dumes 6).

“Grounded in interdisciplinary explorations of medical epistemologies, biopower, and environmental health, this book intervenes to explore how the controversy over how to diagnose and treat Lyme disease sheds light on the tangled relationship between contested illness and evidence-based medicine in the United States” (Dumes 6).

Contested illness: “My use of contested illness is a departure from previous applications because in more broadly describing contested illness as any bodily condition whose biological basis is disputed, it insists that these illnesses are not limited to environmental causation and highlights the inextricability of their relationship with evidence-based medicine. This approach to contested illness has less to do with causation, the effects of contestation, and defining features than with the conditions of possibility that produce ‘medically unexplainable illness’ as a diagnostic category. For example, because evidence-based medicine has formalized the importance of objective over subjective evidence in the diagnosis of disease, illnesses that present with more symptoms (subjective markers of disease) than they do signs (objective markers of disease) bring out epistemic differences within biomedical practice over the extent to which symptoms can be used to substantiate and explain the biological reality of illness. And because of these epistemic differences, patients with contested illnesses straddle the divide between the experience of living a disease and the experience of being perceived to have a medically unexplainable illness” (Dumes 7).

“…contested illnesses are disorders over which bodies of thought are divided, and they are also bodily conditions that are always experienced as diseases but are often perceived to be illnesses” (Dumes 7).

“Over the course of this book, I also suggest that evidence-based medicine’s role in amplifying disagreement over the biological reality of contested illnesses is the product of a foundational feature of biomedicine: the relative importance of the sign versus the symptom in the diagnosis and treatment of ill health” (Dumes 7-8).

“Much has been written about medicalization and biomedicalization and the process by which features of everyday life become the objects of biomedical attention and intervention; less has been written about bodily conditions that are actively excluded from biomedicine’s embrace and the epistemic processes by which they are categorized as unexplainable and, as a result, unmedicalizable. Approaching biomedicine as a ‘stratified process’ that is ‘simultaneously expansionist and exclusionary,’ this book explores biomedicine’s exclusionary features by attending to one condition perceived to be unexplainable—chronic Lyme disease—and the implications of its unexplainability” (Dumes 9).

“In this book, I suggest that evidence-based medicine can be more fully understood as both a technology of biopower and a form of ‘biolegitimacy,’ an argument that builds on Didier Fassin’s critical interpretation of Michel Foucault’s work on biopower…. As a technology whose object is the improvement of individual and collective health and a means through which bodies are legitimated at the same time that they are hierarchized, assigned ‘unequal worth,’ and ‘differentially treated,’ evidence-based medicine invites analytical attention to how biopower and biolegitimacy operate in everyday life” (Dumes 9-10).

“As I explore in this book, however, evidence-based medicine is much more than a set of biopolitical practices, technologies, and institutions that regulate clinical care—it is also a form of biolegitimacy that produces epistemic truths about the biological body and legitimizes differences between the right (or medically explainable) and wrong (or medically unexplainable) ways to be sick” (Dumes 10-11).

“…when conducting research, no matter where I was or with whom I was speaking, I tried always to occupy multiple perspectives within the parameters of my project’s field and, in doing so, attempted to map out relations between these perspectives and between myself and these relations. Unlike methodological relativism, which requires the suspension of one’s own perspective to understand another perspective, quantum ethnography required that I fully and simultaneously inhabit every perspective of which I was aware…. For the purposes of this book, quantum ethnography enables an analysis that inhabits Lyme’s multiplicity of meanings and holds them in productive tension.” (Dumes 13-14).

“More than just nosological preoccupation, anxiety over Lyme terminology and its semantic ambiguity is deeply connected to allegiances to particular ways of knowing the body” (Dumes 16).

“For many mainstream physicians and scientists, ‘support group’ is a four-letter word, a breeding ground for conspiracy theories and antiscience sentiments. For many Lyme patients, mainstream Lyme physicians and scientists are inhabitants of the ‘dark side,’ obdurate obstacles to patients’ recognition as legitimate sufferers, if not the source of their suffering” (Dumes 17).

“In this book, I am interested in knowledge as it is understood and practiced by Lyme patients, physicians, and scientists; I am less interested in knowledge as something that is. My interest in facts—scientific and social—only extends as far as individuals perceive or act on them. The choice to represent ideas and experiences in this way is neither an endorsement of certain practices and opinions nor a superficial attempt at evenhandedness for the sake of evenhandedness; rather, it is an intentional and intimate engagement with the complicated, interactive, and relational processes of meaning making in individuals’ lives” (Dumes 18).

“I do not hierarchize or take a stance on the different kinds of evidence under analysis but, instead, describe them as fully as possible and, more critically, put these kinds of evidence in conversation with each other. The goal of the book is not to draw conclusions about controversial issues related to Lyme disease but to describe how individuals across the divide understand, experience, and act on these issues to shed new light on the relationship between contested illness, evidence-based medicine, and biopower in the United States” (Dumes 19).

“I suggest that biomedicine makes a fundamental distinction between symptoms and signs as legitimate bases for clinical diagnosis and that this distinction simultaneously generates—and holds in tension—biomedical explainability and unexplainability” (Dumes 24).