Our March, 2021 meeting of LMCC took place on Wed. March 31 at 5:30pm est via Zoom. We focused on Rana A. Hogarth’s Medicalizing Blackness: Making Racial Difference in the Atlantic World, 1780-1840, especially: 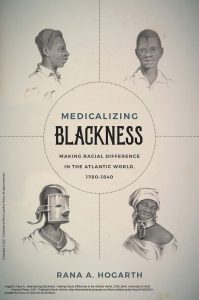 Our next meeting will take place on Wed. April 28 at 5:30pm est using our usual Zoom link. We will post an announcement about that meeting soon.

“Slave owners and physicians seeking to maximize profits, then, had a vested interest in identifying and understanding the ways that black people’s bodies labored, thrived, and experienced sickness” (Hogarth xii). But “there were a number of other physicians who found merit in investigating the alleged differences between the two races, regardless of whether they were pro-, anti-, or ambivalent toward slavery. In other words, physicians could have an interest in locating racial differences without having (economic) interests in slavery” (Hogarth xiii).

“In the most reductive of terms, black people’s bodies came to function as unwilling repositories for physicians to generate new kinds of professional knowledge” (Hogarth xiii).

“We must be cautious in relegating this practice of reifying race to the past. Partly because of the ways that race is still read as a visually distinguishable bodily feature, and partly because of the ways those with power have invested race with social and material meanings, this approach to constructing identity has not only succeeded but endured. Its success is apparent in the corollaries it spawned that held that apparent traits of each race were real—so real, in fact, that they could be discerned on a body like landmarks on a map. This approach to understanding identity continues to haunt the ways in which physicians and scientists imagine the root causes of present-day health disparities, especially those that affect the descendants of forcibly transplanted black Africans” (Hogarth xiv).

“[T]he point here is to illuminate how the practice of investing racial difference with practical medical use is a long and storied one, with roots in both slavery and the development of the medical profession. Drs. Collins and Cartwright, though separated by many decades and geography, shared a faith that understanding blackness within the field of medicine would yield generous benefits to both those who subjugated and profited off of black people’s bodies and those who treated them” (Hogarth xv).

“For the purposes of this study, I discuss the Greater Caribbean as it existed within the Atlantic World, set off by its long reliance on slavery and the cultures that developed there because of that system of labor. The term ‘Greater Caribbean,’ then, represents more than just a geographical or cartographic distinction of place. It is a term that signals the various ways that the plantation economies, demographics, climate, and diseases that appeared in this region helped shape the life experiences of the different races of people that inhabited it” (Hogarth 1).

“The different types of people that came together in this region did much more than create the institutions, communities, laws, and cultures on which nations were built; they catalyzed the creation of identities that used race to forecast and distinguish perceived corporeal and intellectual ability, strength, weakness, and, in some cases, individual and generational achievements. These racialized identities owed much of their existence to the efforts of white physicians, who shepherded their creation through the conclusions they drew about human bodies and their relationship to their environs. With the increased reliance on enslaved African labor, many physicians who worked and settled in the Greater Caribbean took to trying to make sense of the apparent differences they observed between black and white people’s bodies during times of sickness. Their efforts helped to sanction the objectification, exclusion, and subjugation of black people for generations to come, and it is their efforts that form the basis of this study” (Hogarth 1).

“Whether by design or by chance, physicians’ objectification of black people’s bodies in slave societies became an essential component to the development of the medical profession in the Americas” (Hogarth 1-2).

“The preoccupation with blackness that emerged out of this process of constructing race became one of the hallmarks of medicine in the American Atlantic World. My aim in this book, then, is to examine how that process unfolded. A central part of this process is what I call the medicalization of blackness…. For the purposes of this study, I use the term [‘medicalization’] to describe how physicians in slaveholding societies of the Greater Caribbean defined blackness as a surrogate marker of difference to stabilize and reify racial differences. Only by identifying the so-called tangible traits unique to black people’s bodies could these physicians legitimize their discussions of racial differences with physiological proof. And only by proclaiming the existence of physiological difference between black and white people could they justify the time and attention they invested into understanding the so-called peculiarities of black people’s bodies. Put plainly, the construction of racial differences and the medicalization of blackness were mutually dependent forces, essential to the development of medical knowledge production in the Atlantic World” (Hogarth 2).

“[W]hile the claims these physicians made about black people’s bodies certainly served slavery apologists, these claims were not created for the sole purpose of defending slavery. The construction of blackness in the white mind served multiple purposes. Medical constructions of blackness in particular emerged to advance the standing of medical polities in the Atlantic World and expand white prerogatives. That the claims physicians made about black people’s bodies were embraced by slavery’s defenders and detractors should not obscure the rationale behind their creation. As Medicalizing Blackness demonstrates, the embrace of these claims underscores just how powerful the constellation of medical ideas about blackness was in convincing whites that race was a normative physiological trait with social as well as clinical value” (Hogarth 3).

“The sex of the body, its degree of mixture with white or indigenous ancestry, its adaptability to the environment and perceived strength and ability to labor, and even the context in which it labored all helped to determine the degree to which blackness was perceived to influence health” (Hogarth 3).

“The pathological and even normative traits that physicians attributed to black bodies became tools of oppression and power, for even as white physicians constructed images of healthy and robust black bodies capable of enduring brutal labor regimes, they also identified deficiencies within these bodies that disqualified them for self-government” (Hogarth 3).

“For too long, the myths, axioms, and lore about black people’s bodies propagated by these physicians have been referenced as marginalia or chalked up to characteristic white chauvinism of the era” (Hogarth 3).

“In reality, these statements [physicians’ statements about physiological and pathological racial difference] made up a corpus of medical ideas that profoundly affected the expectations of black and white people’s bodies living under the slave system. As Medicalizing Blackness demonstrates, this corpus of knowledge nurtured the development of medical authority in slave societies. In other words, it was precisely the propagation of these ideas that led to the universal acceptance among those with and without a vested interest in the slave system that the bodies of diasporic Africans were unquestionably different from whites, both inside and out” (Hogarth 4).

“First, I disrupt the received history of knowledge production on blackness during the era of slavery by disaggregating the creation of this knowledge from political defenses of the slave system…. I argue that the political and legal threats to the system of slavery, though profound, were not necessary ingredients for medicalizing and reifying blackness” (Hogarth 7).

“Medicalizing Blackness’s second contribution builds on the first by demonstrating how physicians imbued medical knowledge about blackness with clinical and practical meaning. The so-called peculiarities of black people’s bodies became a function of showcasing professional acumen for many physicians who lived and worked in slave societies. The racial idioms that they deployed in their discussions of black people’s bodies formed the corpus of medical knowledge that buttressed their credibility among other practitioners, planters, medical officers, and the lay public” (Hogarth 8).

“Whether by individual action or institutional means, many whites adhered to the belief that black people’s bodies were innately different from white people’s bodies. Indeed, this belief shaped their day-to-day lives and was manifest in attempts to improve plantation labor efficiency, safeguard colonial and civic interests, and enhance their control over black people’s bodies” (Hogarth 8-9).

“For the purposes of this study, I focus on the flow of medical knowledge about blackness between Jamaica and South Carolina—two regions that have been little studied together. Each of these regions boasted black majorities throughout the eighteenth century, as well as sizable communities of elite physicians…. Indeed, much of the medical wisdom about black bodies that would form the basis of American proslavery medical thought in the later nineteenth century had its roots in the Caribbean…. Ambitious physicians residing in Charleston, South Carolina, and the Lowcountry turned to their counterparts in Jamaica and the surrounding islands to augment their knowledge about black people’s bodies” (Hogarth 9).

“Viewing the Caribbean as a formative space rather than a peripheral one indicates a growing trend within slavery historiography…. I echo this approach and bring the genealogies of medical attitudes about blackness and the transnational nature of the medicalization of blackness to the fore. Examining the medical connections between North America and the Caribbean reveals that slave societies within these regions were frontiers of knowledge production on the topic of racial difference. Jamaica and South Carolina were laboratories as much as they were sites defined by tense and intimate contact between black and white bodies. In this way, I highlight connections between two regions that have independently been subject to much scholarly attention but rarely discussed together, least of all in discussions about race, health, and slavery” (Hogarth 10).

“Medicalizing Blackness is organized into three parts. The first part introduces the reader to how physicians used blackness as a means of understanding disease susceptibility” (Hogarth 10).

“The second part of the book focuses on slave diseases and emphasizes how physicians increasingly pathologized blackness in the plantation setting. Rather than focusing on a disease that claimed victims of both races, the chapters in this part of the book focus exclusively on so-called slave diseases—in particular, Cachexia Africana” (Hogarth 11).

“Cachexia Africana was a scourge of plantations across the Greater Caribbean, and its construction had little to do with politicking about slavery’s future. Using descriptions of the disease from Jamaican sources, this chapter shows how physicians easily constructed this disease, fought over the best ways to treat it, and generated a whole literature on it, absent any need to advance a proslavery platform” (Hogarth 11).

“In the final part of the book, I draw the reader’s attention to the ways blackness functioned in medical spaces outside the plantation. Medical institutions, particularly those that taught medical students and provided care for black patients, worked in part to police black people’s bodies and reinforce the idea that these bodies were deviant and in need of white supervision. These institutions became part of the municipal landscape of cities of the Greater Caribbean and functioned as a means to further white prerogatives under the guise of offering care to the enslaved” (Hogarth 12).